I am interested in host-bacteria symbiotic interactions because this is probably one of the major driving forces in evolution, notably in eukaryotes.

During my master?s thesis, I investigated the evolution of the androgenic hormone gene in the framework of the symbiotic interaction between Armadillidium vulgare, a terrestrial isopod, and Wolbachia, a bacterium that induces the feminization of the male isopod. The androgenic hormone is an insulin-like protein produced in the androgenic gland that is responsible for the sexual differentiation in terrestrial isopod species. During the early phases of the development if the protein is expressed the juvenile will become a male, otherwise it will become a female. Thus, this protein is one of the putative targets of the feminizing bacteria. We amplified and sequenced the cDNA of several isopod species and we compared these results with results of Wolbachia transferring and androgenic gland grafting.

Since the start of my Ph.D, I focused my interest on the bacterial genomic aspect in symbiotic interactions. During my Ph.D, I studied insertion sequences (IS) which are a type of bacterial transposable elements (TE). IS density is variable among bacterial genomes, especially related to the life style of the bacteria. The genome of old endosymbiotic bacteria are generally considered to contain no or few IS copies. Unexpectedly, new genome sequencing of endosymbiotic bacteria, such as Orientia tsutsugamushi or Sulfobolus solfataricus, shown a high TE density. I made the annotation of four available Wolbachia genomes that contain an unexpectedly high IS density. These annotations allowed us to describe the evolutionary dynamics of IS in bacterial genomes.

During my first post-doctoral position, I studied the symbiotic bacteria from fresh water cave dwelling amphipod from the Niphargus genus. I investigated the genomic base of the ectosymbiotic interaction between Niphargus amphipods and a sulfur-oxidizing bacteria, Thiothrix, that takes place in a sulfidic cave located in Italy. This symbiotic interaction is relatively recent regarding the evolution time (~1 million of year) and this study could give us information concerning the first stages of symbiotic interactions. The aim of my project was to compare genome sequences of symbiotic and closely-related and co-occuring free-living bacterial strains to identify features and characteristics of this interaction. In addition, I studied the symbiotic load of Niphargus amphipod according to their living location and the presence/absence of sulfide in the water. Finally, I investigated Niphargus mitochondrial genome evolution in link with the oxydative stress due to the sulifidic water living environment.

My current project is not focus on symbiotic interaction but on the freshwater pulmonate gastropod Lymnaea stagnalis. Nevertheless, it will allow me to complete my bi-competent CV (molecular biology and bioinformatics) in order to study later symbiotic interactions at both genomic and transcriptomic level. I am investigating the gene expression and regulation by miRNA of the snail in different tissues and at different larval stages using RNAseq technology. The aim of my project is to uncover the process leading to the shell formation and evolution. The shell, which appear during the pre-cambrian, allowed the evolution and development of a metaozan phyla. This new feature gave an evolutionary gain to the mollusc allowing them to colonize new environment. To date, there is a broad variability in shell form and color but the mechanisms of initiation and regulation of the shell formation are poorly understood. 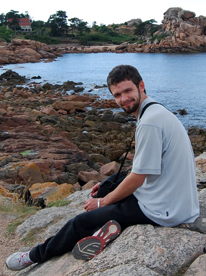