Theodor Fontane’s 67 Notebooks constitute the last still unpublished body of Fontane manuscript materials; the few part-publications that exist do not satisfy standards of textual criticism and editing. From 1859 onwards until the end of the 1880s, Fontane filled notebooks with a mass of miscellaneous materials: diary entries, letter drafts, plans for poetic writing, prose sketches and drafts, lecture notes, drafts for theatre and arts reviews, book excerpts, and also notes and sketchy drawings accumulated on his outings into the regions of Brandenburg as well as on diverse journeys. Added to this, one finds every-day jottings such as to-do-lists, railway departure times, expenditure tables, reading lists and correspondents’ listings. Neglected editorially, the notebooks have failed to enter the over-all Fontane reception and have been drawn on only sporadically to shed light on the genetics of Fontane’s works and texts. The genetic-critical hybrid edition will for the first time collect, transcribe, mark up, comment and publish all Fontane notebook writings. Whereas previous part-publications followed mainly content criteria, the conceptual focus of this edition is on the entire compass of the transmission in all its material and medial complexity.

The edition consists of two complementary parts that by gradation visualize the materiality and enable document-oriented, chronological and teleological access, as well as establish readable and referenceable text and commentary. The open-access digital edition in the Fontane portal will provide every notebook entry synoptically as digital image and diplomatic transcription, as well as an historically-critically edited text with apparatus and commentary. The book edition, to be published with De Gruyter, will consist of the historically-critically edited text version with apparatus and commentary. The genetic-critical hybrid edition holds fresh impulses for genetically oriented literary, cultural and intellectual studies and scholarship. It will also provide a model for future notebook editions with similarly complex contexts of transmission.

The philological working processes towards the edition are significantly supported by digital methods and the deployment of the TextGrid virtual research environment, whose services and tools are adapted and modified to meet the complex demands of the notebook edition. TextGrid supports collaborative research among scholars through exchange of interim results and enables follow-up use of research data under acknowledgement of intellectual property rights. The sustainability of the research data is guaranteed through parallel digital publication in the TextGrid repository hosted at the State University Library at Göttingen.
The project is being realized by the Theodor Fontane Research Centre at the University of Göttingen in Cooperation with the Göttingen State University Library.
(Gabriele Radecke, Heike Neuroth)
(Translation: Hans Walter Gabler) 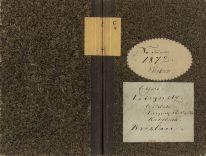