Introduction
Dendrochronology is used as for exact dating of tree-ring width series of wood. The principle is straightforward: variation in tree-ring width is to a great extent influenced by climate. This makes that tree-ring patterns of trees of the same species growing in a certain climate region can be cross-dated and averaged into so-called master chronologies. For the dating principle see the figure on the left (from www.dendro-delag.de, after Hollstein 1985, modified). By overlapping and cross-dating tree-ring series from living trees with those measured from historical, archaeological and geological context long chronologies were constructed that reach back for thousands of years. Meanwhile a network of hundreds of master chronologies of different tree species has been build up for Europe (and the rest of the world). These regional master chronologies serve as a reference for dating tree-ring sequences. Dendrochronologial dating is not a core business of the Dendro-Lab of Göttingen University. There is however close cooperation with the private Dendrolab DELAG, which is specialized in dendrochronologi-
cal dating and also situated at Göttingen. DELAG, in exchange, provides all compiled data to the database of the Dendro Lab at Göttingen University.

Dendroecology is more focused on the tree as an archive to monitor past changes in environmental conditions. Tree-ring width series as well as changes in wood-anatomical characteristics (cell size, tissue composition) are taken as sensitive indicators to study and reconstruct past changes in climate and site ecology.

Paleodendendroecology is one of the main research issues at the Dendro-Lab of Göttingen University. The study material comprises subfossil tree remains from ‘Kiesgruben’ along the rivers Main, Fulda, Lahn, Oker and from peat-bog areas in Northern Germany. These finds yielded thousands of cross-dated tree-ring sequences that are used to compile some of the world’s longest oak and pine tree-ring chronologies reaching back almost 10.000 years until cc. 8000 BC. These chronologies form an unique archive to study and reconstruct past changes in climate, river dynamics as well as vegetation and landscape history throughout the past cc. 10.000 years.


Ring-width comparisons and dendro-dating
To date a tree-ring series measured from a piece of wood of unknown age it is statistically compared with all available regional master chronologies. If a match indicated by highly significant t-values or correlations is found every tree ring of the series can be assigned to a specific calendar year. The last formed tree ring under the bark indicates the felling date of the tree.


Bog-trees: a hydrological and vegetation-historical archive
The Dendro-lab of Göttingen University, Germany, has 30 years experience in investigating tree-ring patterns of subfossil trunks originating from former bog oak- and pine forests. Up to now about 2.200 samples from 140 sites have been investigated with the oldest trees dating back to 6000 BC. The fact that bog oaks and bog pines were growing under marginal site conditions with prevailing high ground-water levels makes them sensitive indicators of environmental, i.e. hydrological changes. Hence ultra-long tree-ring chronologies of bog oaks and pines form a unique archive to study post-glacial climatic and environmental changes. Moreover interesting links can be find between the development of past natural bog forests and its influence on human settlements, like the building of a trackways in 2.850 BC during a wetter period. Yet, ongoing studies (DFG, German Research Foundation, LE 1805/2) on subfossil pine from NW-German peatlands indicate "stress-events”, most likely linked to striking environmental changes, around 4.700 BC and 2.900 BC which exactly synchronize with those in oaks. The fact that peatlands with pine are known as common stages of mire ecosystems provides the chance to use dendroecological reconstructions of peatlands to get a better understanding of climate influence on bog ecosystems. 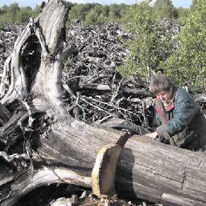