The SAG originates from the early 1920s when the founder of the culture collection, E.G. Pringsheim (1881-1970), one of the pioneers in culturing microalgae, and his collaborators, Victor Czurda (1897-1945) and Felix Mainx (1900-1983), isolated a first stock of cultures at the German University at Prag. The first list of strains of a culture collection of algae was published by Pringsheim in 1928. After Pringsheim's emigration to England in 1939, his collection of pure cultures provided the basis for the establishment of the "Culture Centre of Algae and Protozoa" at Cambridge University, England (now CCAP at Oban, UK). When R.C. Starr (1924-1998) spent the 1950-51 academic year at Cambridge University in collaboration with E.G. Pringsheim, he brought cultures of many Pringsheim strains back to his home institution Indiana University and had others sent from Cambridge soon thereafter. This formed the nucleus of a culture collection which is now at Austin, Texas (UTEX).

The SAG was initiated when E.G. Pringsheim arrived at Göttingen, Germany, in 1953 after his time as a refugee scientist in England. He came at the invitation of R. Harder (1888-1973) who arranged the establishment of a research position and an institution to house Pringsheim's algal collection. Pringsheim became Honorary Professor of Botany in 1953, at the age of 72. With admirable energy and with the help of his wife Olga Pringsheim (née Zimmermann, 1902-1992) he increased his stock, mainly with flagellates and published his important observations in several papers. These activities at Göttingen lasted for 17 years prior to his death in 1970 at the age of 89. Today, 311 strains isolated by both Pringsheims are still available from the SAG. 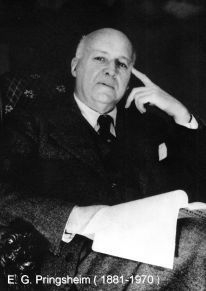 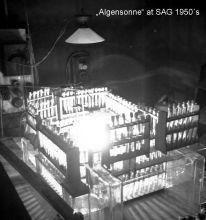 Recent publications on the life of E.G. Pringsheim including an account on the history of the SAG:


From 1954 W. Koch (1914-2006) prepared and established for Pringsheim what later became the SAG. With Koch's employment Pringsheim's algal collection at Göttingen developed into a service collection. Many new strains were added and the first catalogue of the SAG appeared in 1964 included 912 strains of 628 species (W. Koch 1964). Koch collected in the field and during excursions to the seaside (Helgoland, Roscoff) -75 of his strains are still available at the SAG. Koch's research focused on lichen photobionts and he was also very interested in red algae.

From 1979-1999 U.G. Schlösser (*1934) was curator and he further enlarged the stock of cultures, also making his own isolates available (about 120). The increasing number of strains during that time is documented in the SAG catalogs that appeared between 1982 and 2000. Schlösser's particular scientific interest were green flagellates, especially Chlamydomonas (on which he had a close collaboration with the famous Czech phycologist H. Ettl) and autolysins (cell wall dissolving enzymes) in the sporangial development of algae.

Since U.G. Schlösser's retirement in October 1999, the curator's duties are taken by M. Lorenz with T. Friedl as the director of the SAG.