A new twist on stellar rotation

Researchers have observed a twist in the rotational patterns of distant stars, which may explain the presence of starspots on their surface.

(mps) Like our Sun, distant stars are rotating spheres of hot gas. Stars, however, do not rotate like solid spheres: regions at different latitudes rotate at different rates. Characterizing this rotation pattern is important as it is thought to be responsible for the generation of magnetic fields and starspots in stars. A group of researchers from New York University, the Max Planck Institute for Solar System Research (MPS) and the University of Göttingen in Germany has now measured the rotational patterns of a sample of Sun-like stars.

They have identified 13 stars that rotate in a similar fashion as our Sun: their equators rotate faster than their mid latitudes. This rotation pattern is, however, much more pronounced than in the Sun: the stars’ equators are found to rotate up to twice as quickly as their mid-latitudes. This difference in rotation speed is much larger than theories had suggested. The research report their findings in this week’s issue of Science.

What do we know about distant stars aside from their brightness and colors? Is our Sun a typical star? Or does it show certain properties that make it special, or maybe even unique? One property that is not fully understood is rotation. In its outer layers the Sun has a rotation pattern that scientists refer to as `latitudinal differential rotation’. This means that different latitudes rotate at different rates. While at the Sun’s equator one full rotation takes approximately 25 days, the higher latitudes rotate more slowly. Near the Sun’s poles, one full rotation takes approximately 31 days.

In their new work the scientists studied the rotation of 40 stars that resemble the Sun with respect to mass. Among those, the 13 stars for which differential rotation could be measured with confidence all show solar-like differential rotation: equators rotate faster than higher latitudes. In some cases, however, the difference in rotational speed between the equator and the mid-latitudes is much larger than in the Sun.

Classically, stellar rotation is determined by tracking starspots at different latitudes in photometric light curves. This method is limited, however, because we do not know the latitudes of the starspots. “Using observations from NASA’s Kepler mission we can now probe the interior of stars with asteroseismology and determine their rotational profiles at different latitudes and depths”, says Laurent Gizon, director at MPS.

Stars are too far away to be resolved in astronomical images. They are point like. However scientists can indirectly obtain spatial information about stellar interiors using stellar oscillations. Stars undergo global acoustic oscillations that are excited by convective motions in their outer layers. Different modes of oscillations probe different regions in a star. Thus the frequencies of oscillation inform us about different regions. In this study the scientists used stellar oscillations to measure rotation at different latitudes in the outer convection zone. “Modes of oscillation that propagate in the direction of rotation move faster than the modes that propagate in the opposite direction, thus their frequencies are slightly different”, says Gizon.

“Our best measurements all reveal stars with solar-like rotation”, says Gizon. The most surprising aspect of this research is that latitudinal differential rotation can be much stronger in some stars than in the Sun. The scientists did not expect such large values, which are not predicted by numerical models.

This work is important as it shows that asteroseismology has fantastic potential to help us understand the inner workings of stars. “Information about stellar differential rotation is key to understanding the processes that drive magnetic activity”, says Gizon. Combining information about internal rotation and activity, together with modeling, will most likely reveal the root causes of magnetic activity in stars. However, many more Sun-like stars must be studied for this to happen. In 2026 the European Space Agency will launch the PLATO mission (an exoplanet mission, like Kepler) to characterize tens of thousands of bright Sun-like stars using precision asteroseismology. Large-number statistics will be key to studying the physics of stars and their evolution. 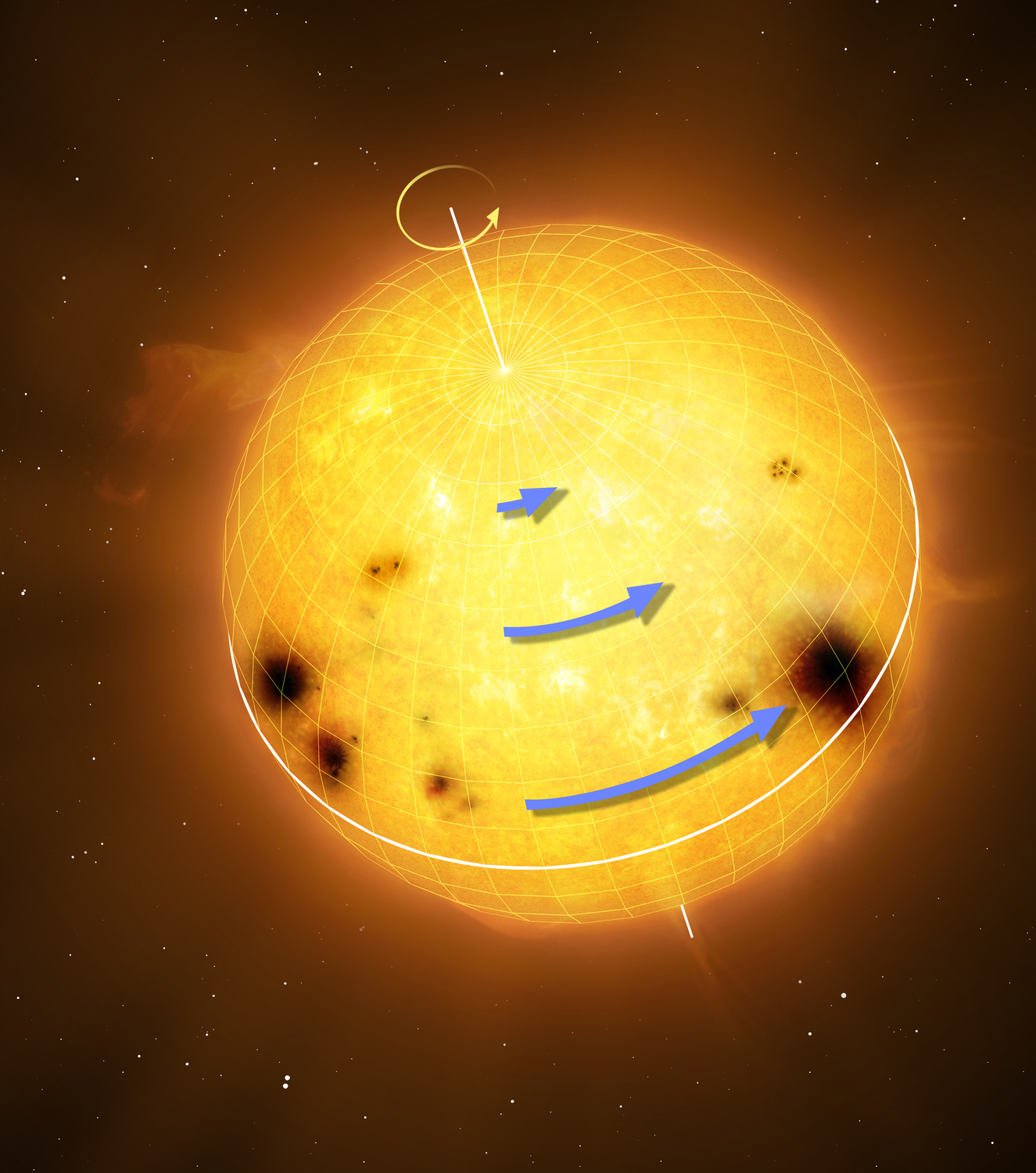 Sun-like stars rotate differentially, with the equator rotating faster than the higher latitudes. The blue arrows in the figure represent the rotation speed. Differential rotation is thought to be an essential ingredient for generating magnetic activity and starspots. 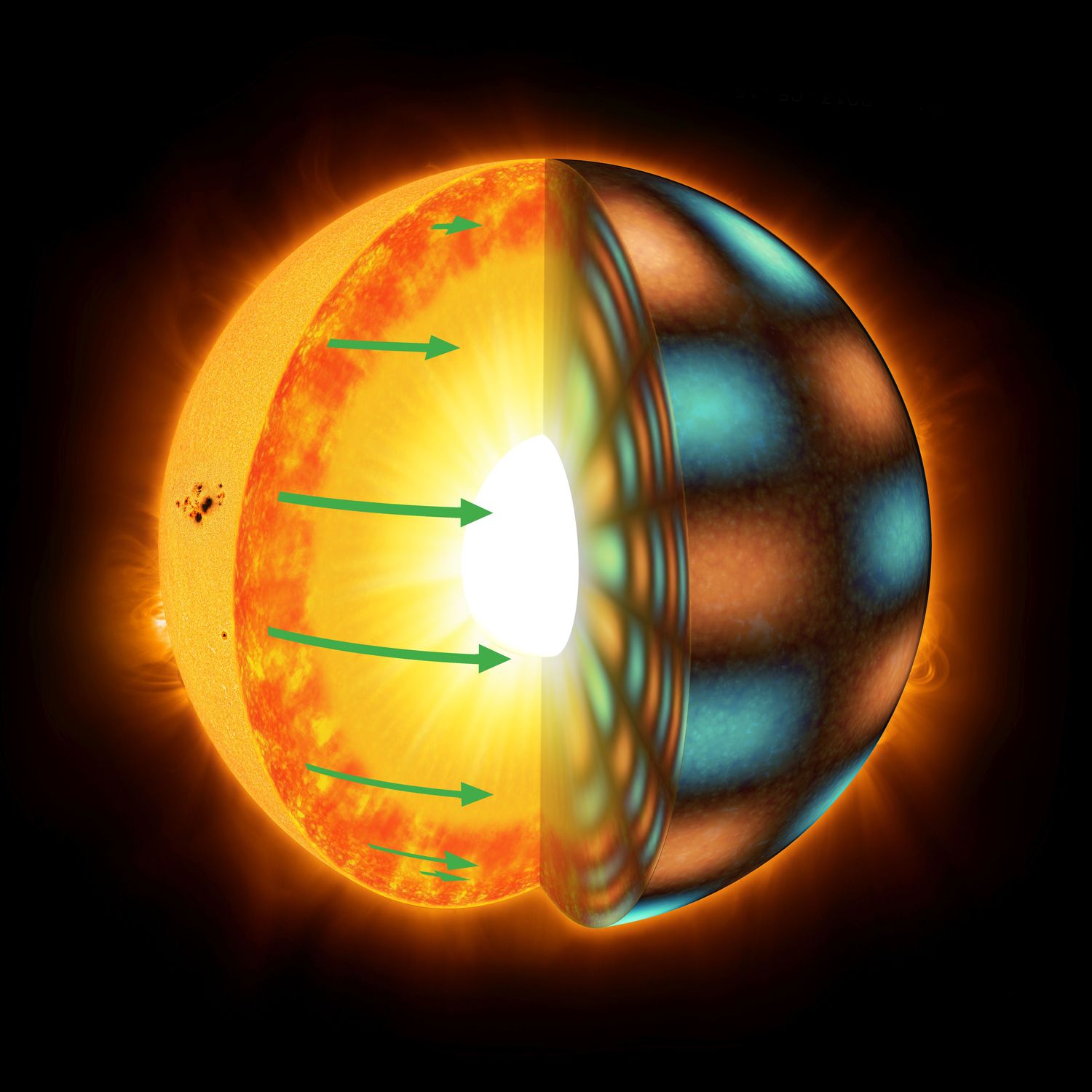 Sun-like stars rotate differentially, with the equator rotating faster than the higher latitudes. The green arrows in the figure represent rotation speed in the stellar convection zone. Differential rotation is inferred from the oscillatory motions of the star seen as orange/blue shades on the right side of the picture. Differential rotation is thought to be an essential ingredient for generating magnetic activity and starspots.