In the winter semester of 1900/1901 Emmy Noether (1882 to 1935) visited mathematical lectures in Erlangen with special permission. After gaining her Doctorate in 1907 she worked without a firm position at the Mathematical Institute of Erlangen until 1915 when she, on request of Göttingen’s mathematicians Felix Klein and David Hilbert, came to the Georg-August-University to work on questions surrounding the theory of relativity. A first attempt at habilitation failed due to the Privatdozent [associate professor] ordinance. In 1919 Emmy Noether was finally able to habilitate after all and was later appointed associate professor. It was not until 1923 that she received her first teaching position with a small fixed salary and was now able to officially lead students up to the examination. In 1933 Noether was one of the first to lose her post. In the USA she was accepted as guest professor at the Bryn Mawr Women’s College and regularly lectured at the Institute for Advanced Study in Princeton. With her efforts to reduce algebraic connections to the simplest abstract terms Emmy Noether is one of the pioneers of modern algebra. 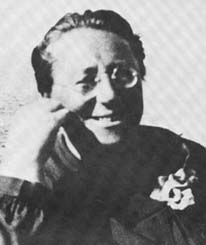