Wilhelm Eduard Weber (1804 to 1891) studied mathematics at the University of Halle, where he also gained his Doctorate and worked as professor. On recommendation of the Director of the Göttingen University Observatory Carl Friedrich Gauß (1777 to 1855) Weber was appointed professor for physics at the Georg-August-University in 1831. The two Göttingen academics jointly conducted research into the earth magnetism. The result of this cooperation was the first electromagnetic telegraph connection in the world. Wilhelm Weber additionally discovered the so-called elastic after-effect, published the fundamental work “Wellenlehre auf Experimente gegründet” [experiment-based wave theory] and “Mechanik der menschlichen Gehwerkzeuge” [mechanics of human legs]. As one of the “Göttingen Seven” who as liberally minded professors protested against the repeal of the constitution of the state of Hanover by King Ernst August, the academic was dismissed from his University post in 1837 and did not return to the Georgia Augusta until 1849. 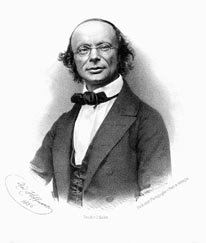