Holocene vegetation and disturbance dynamics in Araucaria araucana forests of southern South America: towards a scientific basis for conservation

The Holocene environmental history of Patagonia has been controlled by diverse disturbance processes. Frequent volcanic eruptions and fires have continuously modelled the local vegetation through time. Human pressure on the landscape has been significant since European contact, in particular for the last ca. 100 years. Northern Patagonia is characterized by a unique landscape with the presence of Araucaria araucana, an endemic conifer of southern South America which is considered as keystone to ecology and evolution. The species is symbolic for the region and of high cultural importance for the native people, while it provides multiple ecosystem services and goods. At present, it is declared an endangered species by the International Union for Conservation of Nature (IUCN) due to the limited distribution area and decreasing population densities. As a result, many protected areas have been created. In spite its huge importance and several ecological studies, little is known about the Holocene history of Araucaria araucana and the response to human and natural disturbance in face of a new global change. Thus, this project looks into the vegetation history to provide inputs for ecosystem management, restoration and conservation issues.
The main goal of this project is to study the dynamics of Araucaria araucana forests during the Holocene, including its most recent history and exploitation, with particular emphasis on the interactions between vegetation, fire, volcanic eruptions and human activities. The work towards this goal is divided by the three mentioned types of disturbance: (i) recent human impact on the landscape and its effect on the abundance of Araucaria trees is analysed trough pollen and charcoal preserved in lake sediments; (ii) fire and volcanic disturbances on the vegetation are investigated trough a sediment record recovered at Lake Relem in Villa Pehuenia, Argentina; (iii) the Holocene history of the Araucaria forests is integrated into conservation and restoration practices as a long-term perspective for applied ecology. 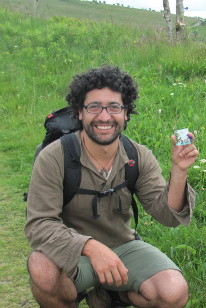