Spiritual Center Bursfelde Abbey is a former Benedictine monastery. It was founded in 1093 and since then has experienced an eventful history. In the 15th century it was a centre of a monastic reform movement (Bursfelde Congregation), which formed a consolidation of more than 100 monasteries in middle Europe (including the abbeys of Maria Laach and Alpirsbach). The Abbey became Protestant following the Reformation and irrevocably after the Peace of Westphalia. Of the former buildings, the Romanesque basilica (today owned by the Hannover Klosterkammer) and the former manor house built in 1722 still remain. The latter houses a lively conference centre.

The abbey lies secluded and picturesque between the River Weser and the woody foothills of the Bramwald. The numerous paths are ideal for walkers and ramblers.

Since the beginning of the 19th century the State Government of Lower Saxony has nominated a Professor of Theology at the University of Göttingen as abbot, who is inaugurated into office by the State Church in Hanover. The close connection between Bursfelde and the university is further expressed by the fact that the abbot is supported by a convent currently comprising 12 professors belonging to the various faculties of the university.

The office of Abbot of Bursfelde has been held by Dr. Thomas Kaufmann, Professor of Church history since 2016.

Each year a university church service is celebrated on Ascension Day; many hundreds of people from the university, the city and the surrounding regions gather together at this unique place for this particularly festive service. It is concluded with an academic lecture, which is then published in the “Bursfelde University Speeches” (Bursfelder Universitätsreden). This series of lectures has been published by the incumbent abbot since 1982.

The Benedictine Abbey of Bursfelde was founded in 1093 and has experienced an eventful history since then. In the 15th century it was a centre of a monastic reform movement (Bursfelde Congregation); in 1542 Elisabeth of Brandenburg (1510-1558), the Protestant Duchess of Calenberg-Göttingen conducted an inspection of Bursfelde, which then became irrevocably Protestant following the Peace of Westphalia in 1648. A monastic community under an abbot lived in Bursfelde till 1672; the abbey was then secularised. Since 1828 the title of “Abbot of Bursfelde” has been conferred on a professor of the evangelical Faculty of Theology at the University of Göttingen. The present incumbent is Prof. Dr. theol. Thomas Kaufmann.

The Romanesque basilica and the west wing of the monastery, which was rebuilt as a manor house in 1722, have survived. The conference centre has been housed in the former manor house since 1978. In 2009 this was extended and modernised. The new premises offer diverse possibilities for use for small groups as well as large. The abbey can be booked for day events and for longer stays. Single guests are welcome at the “Oasis“, a separate area of the house with three single rooms and one double.

The conference centre has 28 rooms (singles and doubles) able to accommodate up to 39 persons. All rooms are ensuite and two rooms are suitable for disabled persons. In addition there are four group rooms, a meditation room and a Romanesque basilica. The abbey itself is situated on the banks of the River Weser, surrounded by a large park and nearby woods (Bramwald/ Reinhardswald).

Antique furniture, tasteful furnishings and the friendliness of the staff with their love of preparing regional and seasonal products characterise the ambience of the house. All the major media are available. Parking is possible directly at the conference centre.

How to get there from Göttingen
Car/ bicycle: Dransfeld, Imbsen, Löwenhagen, Bursfelde
Bus: over Hann. Münden with Bus 195 to Bursfelde (there is no direct bus from Göttingen) 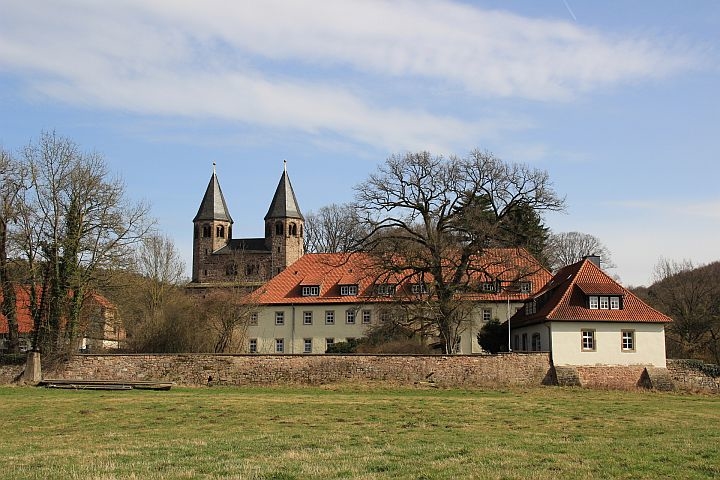