Press release: Colour images from the shadow of a sample

A research team at the University of Göttingen has developed a new method to produce X-ray images in colour. In the past, the only way to determine the chemical composition of a sample and the position of its components using X-ray fluorescence analysis was to focus the X-rays and scan the whole sample. This is time-consuming and expensive. Scientists have now developed an approach that allows an image of a large area to be produced from a single exposure, without the need for focusing and scanning. The method was published in the journal Optica.

In contrast to visible light, there are no comparably powerful lenses for “invisible” radiation, such as X-ray, neutron or gamma radiation. However, these types of radiation are essential, for example, in nuclear medicine and radiology, as well as in industrial testing and material analysis. Uses for X-ray fluorescence include analysing the composition of chemicals in paintings and cultural artefacts to determine authenticity, origin or production technique, or the analysis of soil samples or plants in environmental protection. The quality and purity of semiconductor components and computer chips can also be checked using X-ray fluorescence analysis.

For their new method, the scientists used an X-ray colour camera developed by PNSensor in Munich and a novel imaging system that essentially consists of a specially structured, gold-coated plate between the object and the detector, which means the sample casts a shadow. The intensity pattern measured in the detector provides information about the distribution of the fluorescing atoms in the sample, which can then be decoded using a computer algorithm. This new approach means that the plate can be very close to the object or detector, unlike when using an X-ray lens, which makes this a practical method.

"We have developed an algorithm that allows us to quickly and robustly create a sharp image, simultaneously for each X-ray colour," explains first author Dr Jakob Soltau, postdoctoral researcher at the Institute for X-ray Physics at the University of Göttingen. Co-author Paul Meyer, a doctoral student at the same institute, adds: "The optics simply cannot be compared to normal lenses; they were manufactured according to our precise specifications by a new company in Switzerland." This start-up company, XRNanotech, specialises in nanostructures and was founded by Dr Florian Döhring who completed his PhD at Göttingen University. Research group leader Professor Tim Salditt concludes: "Next, we want to extend this approach to three-dimensional imaging of biological samples, as well as exploring phenomena in imaging such as inelastic scattering of X-rays, neutrons or gamma radiation in nuclear medicine." 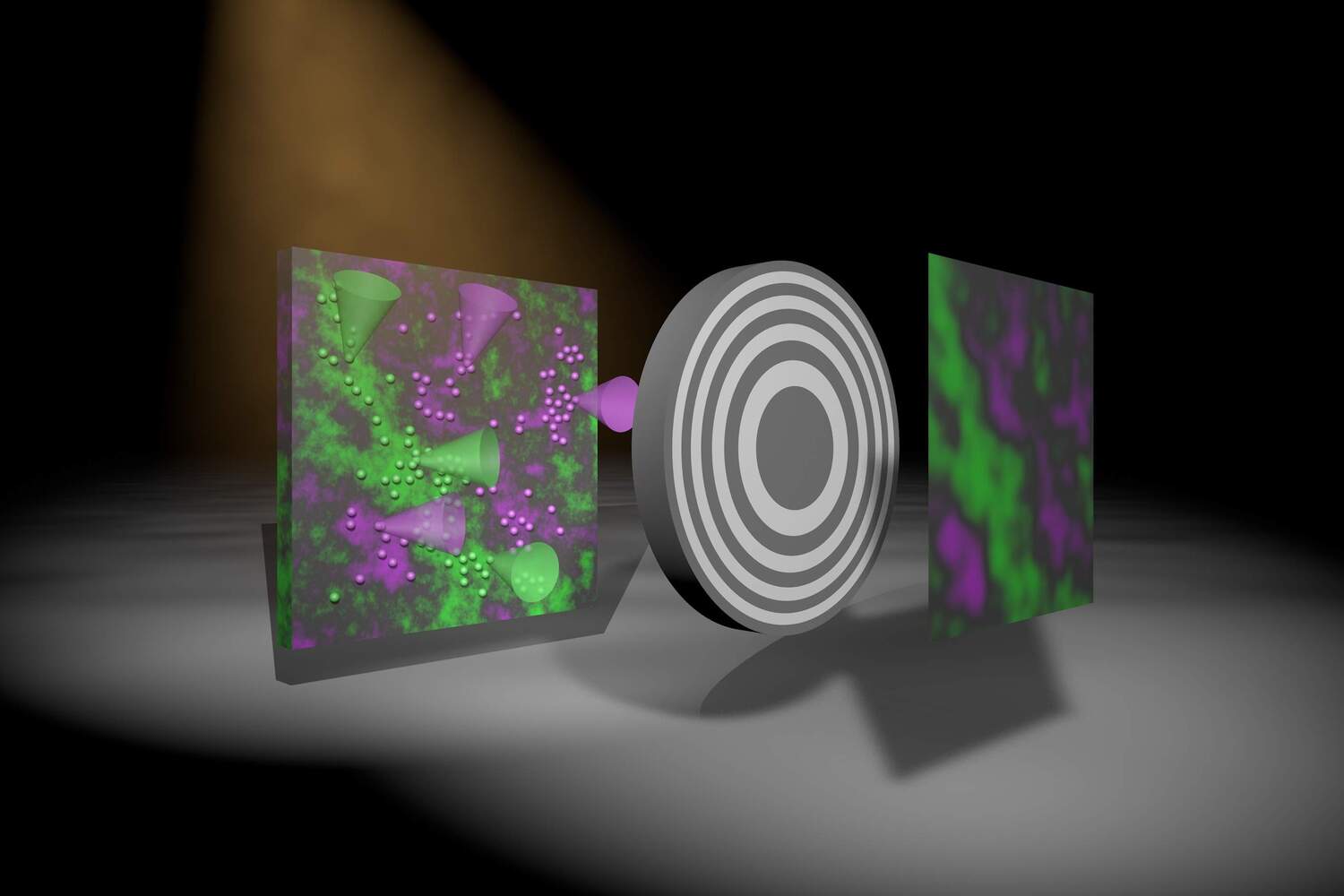 Artistic representation showing how an image is created using the newly developed method. Two colours – green and magenta – are emitted by fluorescing atoms in the sample (left) due to X-Ray excitation. The grey round object represents an optic casting a shadow on the detector. The algorithm then produces an actual image with two colours – the intensity of which represents the density of the fluorescing atoms within the sample. 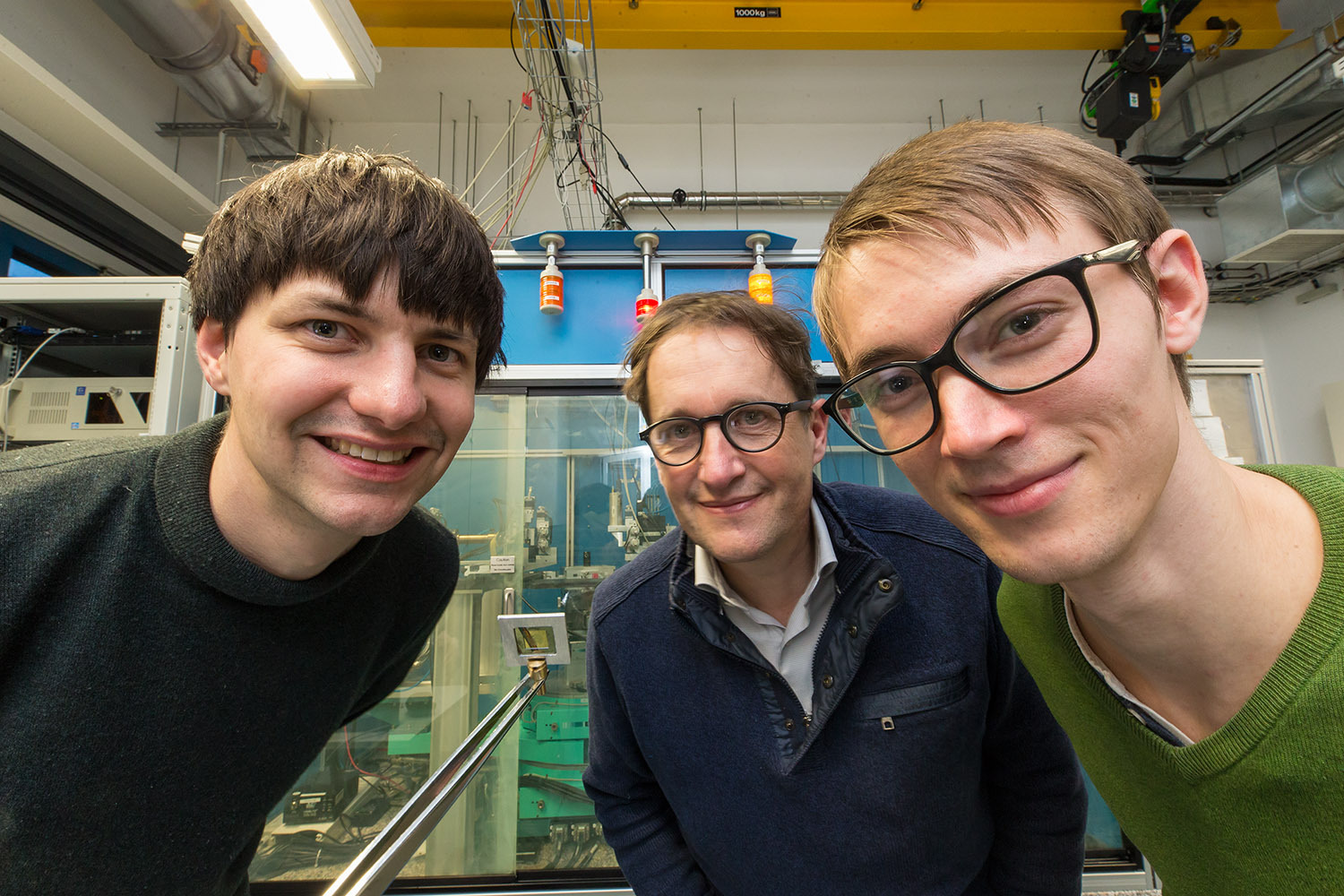 From left to right: Dr Jakob Soltau, the gold-coated plate used for this experiment, Professor Tim Salditt, and Paul Meyer in the laboratory where they carried out this research.