Carl Friedrich Gauss (1777–1855) studied at Göttingen University from 1795 to 1798. At the age of only 30 years, this mathematician, astronomer and physicist was appointed as the director of the “new” University Observatory at Göttingen. He lived there until his death, conducting research in the fields of mathematics, astronomy, physics, geodesy, and geophysics. Together with physicist Wilhelm Weber, Gauss developed the first electro-magnetic telegraph in 1833. The telegraph line above the roofs of Göttingen connected the two scientists’ places of work and helped to improve their communication, and thus their joint research work. “Knowing above believing, reality above appearance,” was one of the first messages transferred – the transfer taking 270 seconds at the time.

Gauss’s discoveries, whose impact can still be felt today, caused international sensation. Amongst other things, he proved that it is possible to construct a regular polygon with 17 sides, and he ushered in the age of classical cartography. He was honoured with the Copley Medal of the Royal Society, London, with a medal minted by king George V of Hanover in 1856 as a reverence to him, bearing the inscription MATHEMATICORUM PRINCIPI (“to the Prince of Mathematicians”), and with other awards. 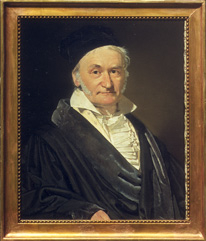