In 1925, James Franck (1882–1964) was awarded the Nobel prize in Physics together with Gustav Hertz for their discovery of the laws governing collisions of electrons with atoms. Franck studied Chemistry at Heidelberg University and Physics at the Universities of Göttingen and Berlin. There he received his doctoral degree and commenced joint research with Gustav Hertz as a professor of Physics. He answered the call to Göttingen to become the professor of Experimental Physics and closely collaborated with Max Born as the director of the 2nd Institute of Physics. He emigrated to the USA in 1933 and conducted research there until he retired in 1954. The title of Honorary Citizen was bestowed upon him by the city of Göttingen in 1953. 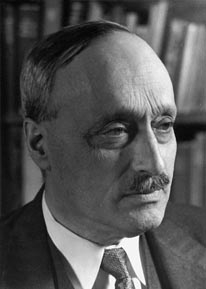