Jacob Grimm (1785 to 1863) and Wilhelm Grimm (1786 to 1859) are considered to be the founders of German studies and German philology. With their fairy tales “Kinder- und Hausmärchen” as well as the “German Dictionary” they are known worldwide. The brothers Grimm joined the Georgia Augusta in 1830. They belonged to the “Göttingen Seven” who as liberally minded professors protested against the repeal of the constitution of the state of Hanover by King Ernst August, and were dismissed from their University posts in 1837. Thereon a publisher offered them the opportunity to develop a dictionary for the German written language documented from 1450 onwards. Within ten years they had compiled a collection of a total of approximately 600,000 words primarily from literary works. 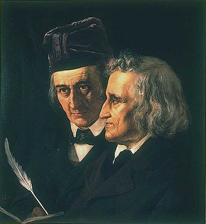