Georg Christoph Lichtenberg achieved world fame as a writer through his aphorisms and satirical writings, and at the same time he is considered as the founder of experimental physics in Germany. He studied mathematics, physics, architecture, aesthetics, English language and literature, the history of the nations of Europe, diplomacy, and philosophy at Göttingen University starting in 1763. He was appointed as Professor of Mathematics and Experimental Physics in 1770, and held lectures on experimental physics, astronomy, and physical geography at his house in the Gotmarstrasse up to his death. Lichtenberg conducted experiments dealing mainly with electricity in his “physics cabinet” which possessed a multitude of devices. The geometrical patterns known today as “Lichtenberg Figures” connected with electrical discharges were discovered by him in 1777; he also discovered the bipolarity of electrical charges. By formulating the basic rules of electricity, he created the basis of present-day electrophotography. Lichtenberg was a member of various academies, e.g. in Göttingen, London, and St. Petersburg.

One of his most famous students was Alexander von Humboldt, who thanked his mentor Lichtenberg with these words: “I do not merely regard the sum of positive insights that I was able to gather from what you told me – what I value even more is the general direction that my train of thoughts took under your guidance. Truth in itself is precious, but even more precious is the skill to find it.”

Lichtenberg’s writings are strongly influenced by ideas of enlightenment and tolerance, a good example being his “Fragment of Tails” directed against Johann Caspar Lavater’s teachings on physiognomy. The scholarly yet entertaining treatises which he wrote for the Göttinger Taschen-Calender (“Göttingen Pocket Calendar”) were the basis for the success of this periodical for over twenty years. His Ausführliche Erklärungen der Hogarthischen Kupferstiche („Extensive Explanations of Hogarth’s Copper Engravings“) were well-known during his time. The “waste books” (“Sudelbücher”) containing aphorisms and his literary correspondence were only published posthumously. 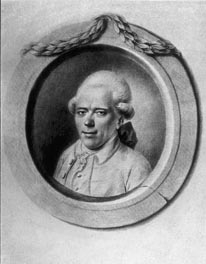