In 1939 Adolf Butenandt (1903 to 1995) received the Nobel Prize for Chemistry for his fundamental experimental work on sex hormones (together with Leopold Ruzicka). From 1921 to 1927 Butenandt studied Chemistry, Biology and Physics at the Universities of Marburg and Göttingen. Here he completed his Doctorate with a thesis in biochemistry and was assistant of Prof. Dr. Adolf Windaus of the General Institute of Chemistry. Following his habilitation for organic and biological chemistry at the Georgia Augusta from 1931 to 1933 Butenandt undertook teaching and research as Privatdozent [private lecturer]. During this time he also led the organic and biochemical department of the General Laboratory of Chemistry. Further stations in his career led him to Gdansk, Berlin and Munich. 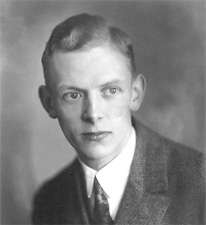