Edith Stein (1891 to 1942) studied at the University of Göttingen from 1913 to 1915. She learnt under Göttingen’s philosopher Edmund Husserl, whom she followed to Freiburg as assistant in 1916 and under whom she gained her Doctorate. In the period following the philosopher Edith Stein returned repeatedly to “dear old Göttingen” and kept in touch with her Göttingen colleagues. Her final visit to Göttingen was in 1921. In 1933 she joined the Karmel convent in Cologne. She was murdered in 1942 in the concentration camp Auschwitz-Birkenau. Edith Stein was beatified in Rome in 1998. 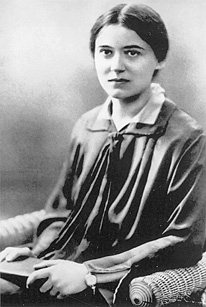