In 1919 Johannes Stark (1874 to 1957) was awarded the Nobel Prize for Physics for his discovery of the Doppler effect in canal rays and the fragmentation of spectral lines in the electrical field. He studied physics, mathematics, chemistry and crystallography at the University of Munich. His scientific work encompassed three large areas of physics: electrical currents in gases, spectrum analysis, and chemical valency. In 1900 he habilitated in physics at the Georgia Augusta; over the following years he taught and researched at the Göttingen Institute of Physics. It was here where in 1905 Stark discovered the optical Doppler effect in canal rays. One year later Stark moved to Hanover as professor for physics, his further academic postings were Aachen, Greifswald and Würzburg. 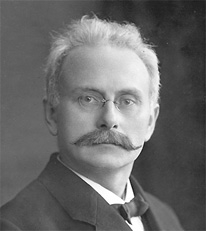