In 1936 Peter Debye (1884 to 1966) was awarded the Nobel Prize for Chemistry for his contribution to the understanding of molecular structures through his research of dipole moments and the diffraction of x-rays and electrons in gases. As successor to Albert Einstein at the University of Zurich Debye modified Einstein’s theory of specific warmth. In the year 1914 Debye became professor for mathematics, theoretical physics and experimental physics at the University of Göttingen, where he taught and researched until 1920. During this time he developed the so-called “powder diffraction method”, which is still one of the most important research methods for determining the structure of crystalline materials. After postings in Zurich, Leipzig and Berlin as well as at Cornell University (USA) he returned in 1961 as emeritus professor to the Gauß professorship at the University of Göttingen. 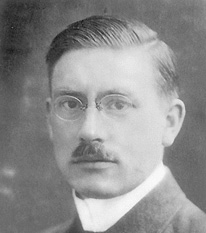